At Bazaar Velvet we are passionate about bespoke designer rugs. But in our rug design we like to take design from the whole artistic world.

Arts and crafts today are, for the most part, hobbies. Usually the preserve of artists & artisans, the retired, children or those interested in keeping the more niche historic crafts from slipping into extinction, handicrafts are no longer an intrinsic part of life. Apart from handmade goods at the higher end of the market and quality scale, craftspeople are unable to compete on cost with mass produced industrial production, and so it is often a labour of love.

However, back in the day, as they say, craft work was a central part of life for those who couldn’t walk down to the local supermarket/DIY/homeware store to get what they need. When everything had to be made from scratch, as would’ve been the case with the early settlers in America, there were dozens of craft professions that people specialised in. Without the knowledge and the ability to make what you needed then you were doomed. Everyone had a speciality and worked together to cover the basic human necessities of food & water, shelter and medical care.

Here are some craft skills that were used by the early colonists; some you will recognise as still in existence and others have long since become obsolete.

While you and your neighbours could raise the log walls to start constructing your house, you would need a specialist to build the roof: the ‘Shingler’. He would make ‘shakes’ (hand fashioned shingles) to roof your new house.

If you were in need of lighting, you could make a candle yourself by rendering tallow (cow lard). Or you could use the skills of a ‘Tinsmith’ if you required an oil lantern, which would be less smelly than a cow lard candle!

The harsh winter was something that was deadly to the unprepared colonist. They would need to store grains and food ahead of time- enter the ‘Cooper’ who would make the barrels to store the foodstuffs.

For all your moccasin needs, a ‘Cobbler’ would construct your shoes for you from any available animal hides. The most commonly available hides were deer hides.

This is a profession that is still a part of life today. A carpenter was a highly valued craftsman whose varied skills in woodwork would be useful across all facets of colonial life.

Although everyone in a colony had a specialisation, there were many crafts that were carried out by many. As aforementioned, candle construction was carried out at home; other crafts such as rug braiding was also carried out at home. In this case by the women after a days work. Unlike designer rugs of today, rug braiding back then was more rough and ready and used whatever materials were present. It was a skill that most women were expected to have and the knowledge was passed down from generation to generation. Spare scraps of material or material bought from a ‘Milliner’ were used to construct these braided rugs which were then used to keep the home warm. 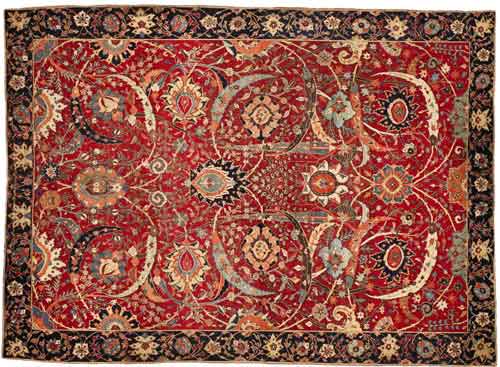 How Much is your Rug Worth? - Hand Knotted and Oriental Luxury Rugs

Signup to our newsletter

No type of contemporary rug design holds quite the same mass appeal of the striped rug. They have a clean, simple aesthetic yet are enriched with a sense of fun that can really lift a room. There[...]

The team at I & JL Brown share a philosophy not unlike our own at Bazaar Velvet. They aim to ‘guide customers to the item of furniture they have always wanted but could not find’. The I & JL Brown[...]

At Bazaar Velvet, our relationship with the phenomenally talented Jo Berryman has spanned many years, providing the most beautiful luxury rugs for her high-end projects. As head of the renowned[...]

An interior design revolution has begun. During the past few years our homes and stores have become flooded with minimalistic Scandinavian style furnishings. An aesthetic that was once refreshing,[...]